I really seem to be on a dessert roll, thanks to all the inspiration from the FB group Home Baker's Guild. I tried a new dessert and an old tried and tested recipe.

The already tried is carrot cupcake. 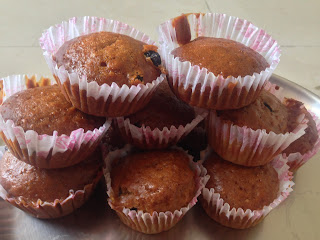 I was going to make them into a cake, but V preferred cupcake. The idea is to prepare something every week for V's school snack. Something interesting.

I tried a no-bake chocolate tart. 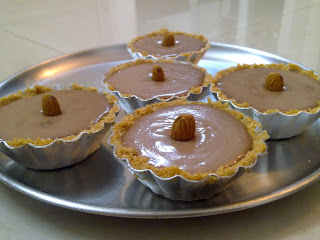 I have been wanting to try chocolate tart for years. This dessert makes me extremely nostalgic, as it goes way back to my college days. There used to be this bakery near my college called Baker's Inn, which sold the best ever chocolate tarts. Ever since we moved to Chennai in 1996, I have been on the look out for tarts that taste atleast close to this, but have only faced disappointment every time I buy one. Having gained so much confidence in desserts now, I decided to try making these myself. Pardon me if I sound conceited, but I am happy that I tried. Finally I think I have (almost) matched the taste of my favorite dessert.

I was too lazy to bake the tart shells, so used the digestive biscuit+butter as base. For the filling, made chocolate ganache using the recipe from Martha stewart. It was an instant hit with the family as well. And so simple to make.

And guess what my new toy is 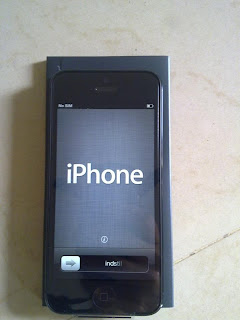 Isn't it a beauty?! V says "Amma this is too much, you have not put your phone down ever since you got it". I am addicted to it. Have been fidgeting with it non-stop. And I have not even started downloading any apps or music!!

Having said so much, you would have guessed that I have made zero progress in december cottage. I have picked it up again, and am making slow and steady progress.

Well, that's all from me today. Till next time.. Take care.. Be happy.. Keep stitching.. Au Revoir

Lots of baking and Tusal

Whooo am reallly on a baking spree now. Last week I tried 2 new recipes - a cookie and a pudding.

The cookie is part of a challenge hosted by the Homebaker's guild - a group of bakers on FB. The challenge is called the choco-nana crinkle cookie challenge 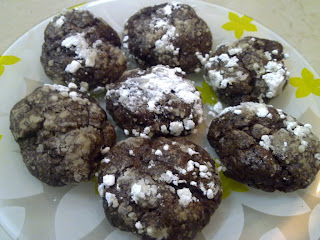 It's an absolute yumm recipe and a must-try. The recipe is from here

The pudding was something that I've been wanting to try for a very long time. So finally I put this together, literally on Friday night for dessert. 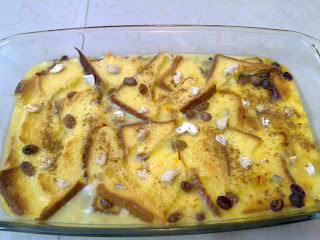 This is what I did:
Line the baking dish with bread slices, pour cooked custard covering the bread layer completely, top with raisins and nuts of your choice and bake in a preheated oven for 15-20 minutes. I sprinkled some cinnamon and also added a few strands of saffron to the custard. Server warm. The hubby and V totally loved it.

Now for the Tusal 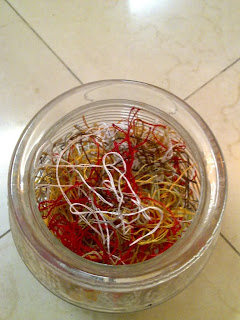 There's not much progress since my last Tusal. I have just managed to put in a few stitches on December cottage.

Here's where I stand with it now 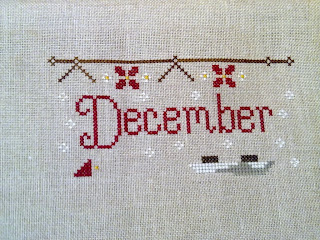 I am taking it really slow for a few reasons - this is the last of the cottages and am cherishing it and also, am waiting for the arrival of Spinach

And here's my July in all its glory 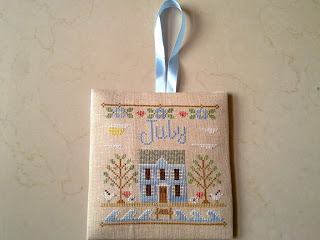 That's all from me for today dear friends. Till next time with more baking and stitching.. Take care.. Be happy.. Keep stitching.. Au Revoir
Posted by Akila at 9:19 PM 2 comments: Links to this post

The Vegan kitchen and a few other books

Oops, it's already July 1st and I do not have the cottage of the month all done up :( And this time even V forgot to remind me!!!

While I put July together, I thought I'd write about this new recipe book I borrowed from the library. It's called My Vegan Kitchen by Anuradha Sawhney.

I was looking for a book that suggests quick lunch box recipes and found this one.

The cover was quite interesting, unlike the usual which made me pick this up. 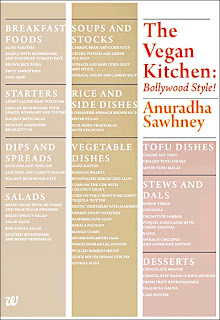 And also I liked the different desserts under the dessert/sweets category. On going through it though, I was slightly disappointed in that, most of the dishes are the ones we are already familiar with in the kitchens of India. There was nothing different, nothing that I HAD to try from the book.

Apart from this I also borrowed a few other books - The baker's dozen (which is a collection of short stories written by Indian authors), US edition of good housekeeping (I love that magazine) and Pure sequence. 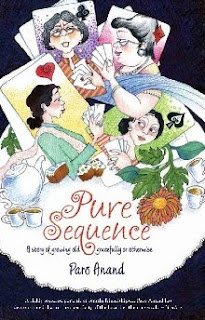 I liked Pure sequence - this is a very different novel about how 4 ladies in their twilight years accept their current situations and how they make the best of them. I really enjoyed reading it. For once, this was not yet another love story.

Thanks to all this reading, I guess the crafting has taken back stage. I tried my hands at baking cinnamon rolls again last weekend

and the family loved it. Though they did not specifically say so, I did not have any left to bring to work the following monday. I guess that's a good sign?! ;) For better effect, I tried to show the pictures from my first trial and the one I made last weekend. The recipe I used was a no-yeast one from Joy of baking. The recipe can be found here.

That's it from me today friends. Till next time.. Take care.. Be happy.. Keep stitching.. Au Revoir
Posted by Akila at 7:50 PM 1 comment: Links to this post